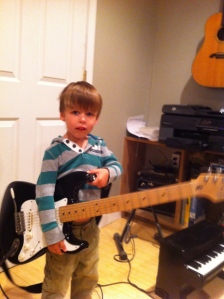 There’s no way to say it, but to just say it: The kids and I have started a band. Scratch that. We’ve started a kick-ass band. To say we rock is an understatement. The kids typically share the drum set, while I wail on the electric guitar. Occasionally, my daughter will kick the piano keys. My son only says one phrase during each jam session: “Louder, Daddy. Louder.”

Our influences? Beastie Boys, Nirvana, and Justin Bieber (his edgier stuff before he sold out).

Obviously, since we’re dealing with two toddlers and an A.D.D. dad, the band name changes quite a bit. First, we were the Yogurt Explosion, but we decided that was too sophomoric. We do a pretty good job keeping our yogurt in its container these days. So right now, we’re calling ourselves Toots and the McGoots. I’m not sure who’s Toots and who’s the McGoots.

We share bylines on all of our original songs, but to be honest, I do most of the heavy lifting when it comes to the lyrics. Mainly because the kids can’t write yet. Every time I give them crayons and paper to work on a chorus, they just draw circles, which they then tell me are whales. They’re not whales. They’re circles, but I’m supportive.

Even though we’re still looking for a label, we’ve got a full album worth of songs. We’ve titled the record,  Don’t Call the DSS. It’s a concept album in the vein of Pink Floyd’s Dark Side of the Moon. If you start our album half way through Apocalypse Now, the music synchs up perfectly with the action on the film. When Martin Sheen meets Colonel Kurtz and “Yep, That’s Poop” kicks in, I get chills.

The record kicks off with Honey, We’re Out of Wipes, which is the single we’re we’re hoping will get a lot of radio play. It’s really melodic. Then things get a bit Ska with Is That Poop? We sample the Clash’s “London Calling” for this one. Then it gets heavy with three punk songs in a row: 3am Puke Fest, Fuck Sleep, and Yep, That’s Poop. Then we slow things down a bit with Don’t Worry, It’s Just Yogurt, a sweet love song that sets the listener up for Petrified Turkey Sandwich in the Glove Box and the finale, A Sixer Fits Nicely in this Diaper Bag, a classic country ballad that was also the inspiration for the album title, Don’t Call the DSS.

The toughest aspect of playing in a predominantly toddler band? Trying to get a three-year-old drummer to follow my chord changes. Booking gigs has been tough too because of bed time constraints. But every band has to start somewhere. Toots and the McGoots may only be playing my basement right now, but with the massive loopholes in child labor laws, the sky’s the limit.

Here’s a short clip of the drum solo in the middle of 3am Puke Fest. Enjoy.

I became a little teary eyed during a commercial for a combination steamer/vacuum this morning. It was just so beautiful. Not only does this product vacuum up all the crap your kids leave behind, it “sanitizes the floor with steam” at the same time. The woman using it said so. And she looked so happy.

My emotional response to this commercial means that the transition from dude to house wife is almost complete. The next time you see me in public, I’ll probably be wearing Jeggings and a little tipsy from too much afternoon Chardonnay.

I thought about trying to fight the transformation by doing some pushups or hitting a strip club, but who has the energy anymore? And let’s face it: I’m more comfortable discussing the latest episode of Fashion Star with the other moms at the park than I am talking football with my dude friends. So I’ve decided to embrace it. I can’t wait until the kids are a little older and I can spend my days reading vampire/werewolf books written for teenage girls.

Wait, can I even use the term “housewife” anymore? Probably not. I bet it was retired along with “stewardess” and “secretary.”

Several of my friends were “houseboys” for sororities in college. They cooked, did a little cleaning of the massive Southern mansions the girls lived in, and had a lot of sex with the residents. None of them seemed to complain about the “houseboy” title.