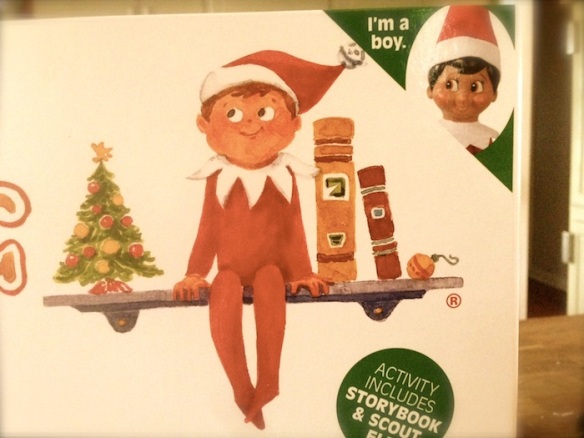 So I’m wrestling two ridiculous problems right now. I have my share of normal problems like deadlines and a conspicuous lack of funds in my bank account and a piss-poor mile PR and absolutely nothing to cook for dinner that my kids will eat, but the two problems that are currently demanding a lot of time and energy on my part are absolutely, utterly ridiculous.

Problem Number 1: There are zombies in the toilet.

At least, that’s what my daughter thinks. So she’s too scared to go to the bathroom alone. Instead, she forces me, or her mom or her brother, to come into the bathroom and watch her. “Because if you don’t come with me, the zombies will crawl out of the toilet and bite me.”

Obviously, this problem is a holdover from Halloween.

Problem Number 2: We’ve lost our Elf on the Shelf.

We moved. Apparently, our Elf didn’t move with us. At first glance, this seems like an easy problem to fix. Go buy a new Elf on the Shelf. The kids will never know the difference, right? That’s what I thought, too. The problem is, our original Elf on the Shelf was one of the Vaguely Ethnic Elves. He’s not black, but he’s not white. He could be Hispanic or maybe Middle Eastern or even Asian. I don’t know, I feel uncomfortable even trying to guess at the Elf’s ethnicity.

The point is, he’s definitely more tan than the standard Elf on the Shelf, which is great. We follow a strict “White Man’s Guilt” approach to race issues in our house, meaning we ignore race altogether. I’d like to say we originally purchased the Vaguely Ethnic Elf to teach our kids a lesson about race, but the fact is, I picked up the first Elf I saw in the store two years ago without realizing it was Vaguely Ethnic and then my wife and I debated for five minutes in the store about whether or not putting Vaguely Ethnic Elf back and getting White Elf would be racist. Then we felt racist and guilty just because we actually thought about putting the Vaguely Ethnic Elf back on the shelf…

So we have…nay…had a Vaguely Ethnic Elf on the Shelf, and we spent the last two years ignoring his race and all was right in the world. The problem is, I go to the store to replace this Elf and all I can find in the God damn store is White Elf. Boxes and boxes of White Elf. There’s a Girl Elf now, which is awesome, bully for women’s elf rights, but my kids are expecting a super tan elf to show up and judge their actions for the next 20 some odd days. Not a Girl Elf and not a White Elf.

Or maybe not? Maybe our kids never noticed their Elf was Vaguely Ethnic? Maybe our complete ignorance of race has worked and now our kids literally don’t see color? Or shit, maybe that means they’re even more racist because they can’t see the beauty and differences of different ethnicities. Jesus Christ. There should be a manual.

Meanwhile, I’m wandering around the store looking in every aisle for a Vaguely Ethnic Elf because I don’t want to ask the store clerk if they carry an Elf that’s, “you know, darker than this elf?”

Like I said, I’ve got plenty of problems right now, but the ones I’m mostly concerned with are utterly ridiculous.