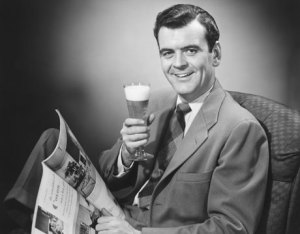 The kids are working on a super-secret father’s day present in day care today. The teacher won’t tell me what it is and the kids aren’t talking either. We live in one of those alternative towns that’s always on the “Best Places to Live” lists, so I assume the present is something completely worthless, like a Tibetan prayer flag made from recycled restaurant napkins. Fucking hippies. Not that I ever gave my own dad anything worthwhile on Father’s Day. I leaned heavily on the standards (ties and grilling paraphernalia), because, like most kids, all I ever saw my dad do was go to work or operate the grill. He’s retired now and those are still his two favorite things to do.

I think it’s safe to assume the kids won’t be making me an ashtray. I wonder who was the last kid in America to make his dad a Father’s Day ashtray in school? Is there a name for that generational cutoff—the kids who were raised in an era where all dads smoked? The Second-Hand Generation?

Whatever the kids make me, I’m sure I’ll cherish it forever…or at least until they go to bed and I can safely throw it away without causing a tantrum. My wife keeps asking me what I want for Father’s Day, and I keep telling her that the kids have already given me the greatest gift ever. In reality, I want what all dads want: pornography and booze. But some stupid federal laws keep my kids from buying either of those things, so I’ll just smile and take the tie or grilling utensils, just like my dad did.

Besides, we all know Father’s Day isn’t really about fathers. It’s about mothers having a designated day to be nice to their husbands in order to assuage their guilt about incessantly nagging those husbands the other 364 days out of the year. A friend of mine suggested we take a guy’s trip over Father’s Day weekend. On paper, it looks like a good idea—if there’s one day out of the year a dad should get to do what he wants (drink beer on the beach and look at college chicks in bikinis), it’s Father’s Day. But I quickly declined and advised the other dads in the group to do the same. The delicate balance of our marriages would be disrupted if we deny our ladies that singular opportunity to repent for their year of sins.

As for Mother’s Day, that’s obviously a sham too, because as we all know, everyday is Mother’s Day. The entire institution of marriage depends on the husband doing exactly what the wife wants day in, day out. She chooses the restaurant, the movie, the weekend activities, the vacation, the car…Any dude who disagrees is either naïve or divorced. You may think you’re the master of your own universe, but peek behind the curtain and you’ll see your wife is really pulling all the strings.

Do I sound bitter? I’m not. Like all happily married men, I consider myself lucky to be in this situation. There are two good reasons why we’re happily subservient: 1) Our wives are pretty. They’ve agreed to hang out with us and let us see them naked for the rest of our lives. Awesome. 2) Our wives are smarter than we are. You can disagree with this all you want, but the fact is, if men truly called the shots in their family, the household would resort to something like Thunderdome. Nobody wants that. Long live Mother’s Day.